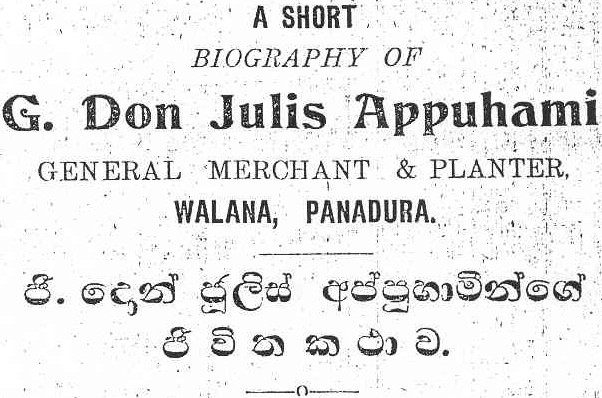 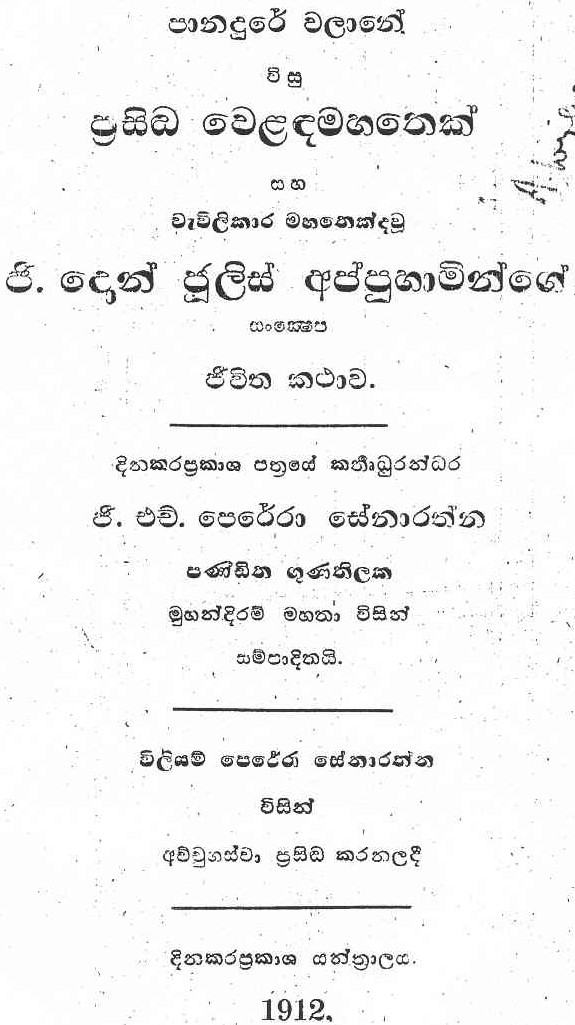 The exemplary life of Mr. G. Don Julis Appuhamy who passed away recently therefore is a biography suitable for publication. Any errors in this presentation are regretted.

CHILDHOOD
G. Don Julis Appuhamy  was born in Kesbewa of Salpiti Korale on 23.11.1853. His father was Gulawattage Don Lewis Appuhamy and mother was Ridiwitage Dona Pinnohamine. Father was a pious Buddhist farmer. By educating his children in Buddhism he paved their way to be successful in the present and later lives. He had his early education at Kesbewa Government School, where James Alwis Kulatunga was a teacher.

START OF A CAREER
Around 14 years of age, young G. Don Julis Appuhamy left for Badulla District in 1867 to start a business. Although parting from parents, brothers and sisters was difficult, this courageous young man left home on this far away mission with enthusiasm. In the absence of train transport it was a hard journey at the time.

The business started in Badulla was a general one, collecting cardamom and cloves and transporting them to Colombo. It was strenuous, but profitable. This enabled him to start stores at Ratnapura and Badulla and supply rice and other items to plantations of  the Europeans. Also, since coffee cultivation was good at the time, he stocked coffee for sale at better prices later. He purchased coffee and other products in Uva Province and started selling them to big companies in Colombo by opening a trading company in 1883.

This way G. Don Julis Appuhamy became very prominent, as said in …(a Pali stanza)… meaning: ‘Serving the country, agriculture, science, lending money, business are means of economic development. Of all these, business is the foremost in profit making’.

He also opened a business at San Juan Street in Colombo to import rice from India. It was later moved to No. 10-11 Gas Works Street. He was also engaged in leasing plantations.

PLANTING
Cultivation is a profession, which helps to develop a person just like business and therefore G. Don Julis Appuhamy started cultivation activities also. He started coconut and rubber plantations in Kurunegala district – Pitigala Korale, Colombo district and Veyangoda – Raigam Korale, which were very successful and it helped him to become a good planter.

GRAPHITE MINING
In 1896 he started mining graphite at Kuttikande mines, Sabaragamuwa Province and Kottiyawatta Mines of Raigam Korale, where about 500 people were employed. He also was associated with the famous Panhela mines.

PROSPERITY
G. Don Julis Appuhamy had a humble beginning and through righteous professions became a famous and rich person.  He resided at Charlie Villa at Maitland Crescent, Cinnamon Gardens and later moved to Walana, Panadura. He owns properties in Colombo and  Siyana Korale and Raigam Korale, which yielded a big annual income.

EXPERIENCE
Although he was not educated at higher educational institutes, his knowledge about business and cultivation was second to none. This is a good example to today’s youth.

He was also a member of the Union of Graphite Merchants of Sri Lanka.

MARRIAGE
On April 20, 1883 he married Matilda Perera Hamine, daughter of Juanis Perera of Walana and had seven children, five of whom were girls and two were boys. Elder son  G. Don Charles Wijewardane is today twenty years old and his second son is G. Don Edmund Wijewardane.

Of the girls, four were married to J. G. A. Weerakoon, M. H. Jayatilaka – Proctor,         D. L. Welikala– Proctor and C. Batuwanthudawe, School Inspector. It is with pleasure we state that   these four gentlemen are leading honorable lives.

PHILANTHROPIST
G. DON JULIS APPUHAMY spent his wealth to help others also. Some of these activities are building Mahanama Buddhist School in Panadura for the young and donations made to the government for the purpose of building a hospital.

BUDDHIST ACTIVITIES
As a Buddhist he executed a lot of work, some of which are the two-storeyed library building of Sri Siddhattarama for storage of Buddhist chronicles, new paintings and the bell tower at the same temple, improvements to Saranapalarama of Walana, etc. He also contributed to the development and reconstruction of Mihintale and Ruwanwelisaya and participated in various meritorious deeds with other Buddhists in Sri Lanka.

He made big offerings to Buddhist priests and helped the poor. This way he greatly contributed to Buddhist activities and as a Sri Lankan helped others at all times.

HELPING RELATIVES
It is known that G. DON JULIS APPUHAMY has helped his brother G.Don Siyadoris Appuhamy and confidant K.Don Carolis Appuhamy financially. He provided assistance to others in the same way he looked after himself.

GOOD CONDUCT
It is the duty of parents to teach children and to provide them with wealth. It is a greater duty to lead them on the path of good conduct. But, if a child who is well educated and rich    is not of good conduct he becomes a problem to himself and the rest of the world. This is true when we think about some educated and famous people who have passed away. We do not wish to publish their names. Some of them were famous lawyers, while some were famous writers or speakers. But their lives were not exemplary. The secret to this condition is the lack of good discipline. Therefore, teaching discipline to children is a great service and they will be leading good lives wherever they are.

We know that his father taught the religion and Sinhalese customs to G. Don Julis Appuhamy, which enabled the latter to lead a righteous life here and beyond as well.

Though he was rich, unlike some other rich people today he was not proud and he treated all others with respect and kindness.

UNBLEMISHED LIVELIHOOD
Some youth, who went to far away places for work indulged themselves in drinking habits, gambling and other vice, thereby spoiling their lives. But  G. Don Julis Appuhamy evaded such evil and fulfilled his dreams. Younger generation should take note of this.

LAST DAYS
During the final days he left his business activities and stayed at home because of ailments. He was first treated by famous Sinhalese doctors and later by European doctors G.D.Thomas, S.Paul and Lucian de Silva. Later, on July 28, 1912 at midnight he passed away amidst Dhamma chantings.

It is with pleasure we state that G. Don Julis Appuhamy was self-made and our younger generation should take an example of him and engage themselves in business activities etc.

We lament the passing away of honorable G. DON JULIS APPUHAMY.

One of our Buddhist friends has sent the following poems on the occasion of his funeral:

FUNERAL PROCESSION
About 3000 people participated in the funeral. Prior to closing the casket, a Pooja was conducted by the priests. The procession was led by a group of children carrying flowers and flags and then a musical band of volunteers. This was followed by, the hearse drawn by two white horses, with the corpse in an oak casket. Advocate A.St.V. Jayawardana, Barrister C.Batuwanthudawe, J.V.G. Jayawardana, Mudalyar of Panadura Thotamuna and Proctor P.H.Gunaratna accompanied by about two to three thousand others walked behind.

At the cemetery, accompanied by Hewisi and under Uduwiyan, the casket was laid to rest in the pyre. Led by the head priest of Peliyagoda Vidyalankara Pirivena, Tripitaka Vachisvara Ven. Dharmakirthi Sri Dharmaramabhidana Mahanayaka Thera, about sixty priests of Siyam and Amarapura Nikayas were offered Mataka Wasthra (cloths). Subsequently the head priest spoke about the meritorious character of the deceased, followed by a Dhamma talk by a priest of Amarapura Nikaya. Finally, around six p.m. the funeral pyre was lighted by two brothers of the deceased.